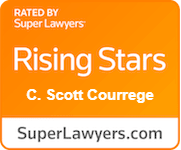 After graduating #1 in his law school class, Scott Courrege was admitted to practice law in Louisiana in the Spring of 2018. Scott was born and raised in Bay St. Louis, Mississippi, and graduated from St. Stanislaus High School in 1998. In 2001, Scott was hired as a police officer for the Gulfport Police Department and worked full-time while he completed his B.A. in Criminal Justice at the University of Southern Mississippi.

In 2003, Scott went to work for the United States Border Patrol, where he served as a Senior Patrol Agent on the prestigious San Diego Sector Air Mobile Unit. He later transferred to the Drug Enforcement Administration (DEA) as a Special Agent in the Phoenix Field Division. In 2008, Scott left government service and directed security operations in the private sector, facilitating the international transfer of high-value assets.

Scott returned to public service in 2009 with the East Baton Rouge Sheriff's Office, where he worked in various positions, including the Uniform Patrol Division, the Community Policing Unit, the Special Community Anti-Crime Team, and the Narcotics Division. As a Narcotics Detective Sergeant, Scott was assigned to the Baton Rouge DEA District Office as a federal Task Force Agent, where he conducted several high-level federal investigations, leading to the arrest of individuals throughout the United States.

Additionally, Scott maintains an instructor certification in Standardized Field Sobriety Testing from the National Highway Traffic Safety Administration and regularly teaches academy trainees at the Capital Area Regional Training Academy. Scott was awarded Uniform Patrol, Special Operations, and Detective of the Month Awards, and received the Detective of the Year Award in 2016. Also, he was recognized by the United States Attorney's Office in the Middle District of Louisiana for "Investigative Achievement" in 2017.

During his tenure with the sheriff's office, Scott began attending the Southern University Law Center's evening division program. He was a Senior Editor for the Southern University Law Review, which published his article entitled, "Drugged Driving: How the Legalization of Marijuana Has Impaired the Ability of the Louisiana DWI Law." Scott received Cali Awards for Excellence in Legal Writing I, Legal Research, Criminal Law, Legal Writing II, Obligations, Torts I, and Advanced Legal Writing.