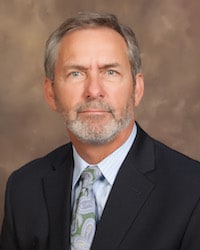 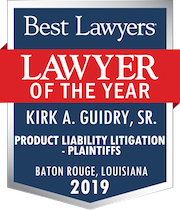 Baton Rouge's Best Lawyer's in America© 2019 Lawyer of the Year in Product Liability Litigation, Kirk A. Guidry is an attorney licensed to practice law in Louisiana (since 1991), and is admitted to practice in all Federal Courts in Louisiana, and before the United States Fifth Circuit Court of Appeals and the United States Supreme Court. For 2013-2022, Kirk has been selected for inclusion in Louisiana Super Lawyers-Personal Injury Plaintiff.  Kirk is also recognized in Best Lawyers in America 2022 in the practice areas of Products Liability - Plaintiffs and Personal Injury - Plaintiffs, and enjoys a prestigious AV Peer Review Rating from Martindale-Hubbell, thus signifying the highest legal ability and ethical standards. For 2015-2020, Kirk has also been selected for inclusion in The National Trial Lawyers Top 100 Trial Lawyers.

Kirk grew up in Lafourche Parish, Louisiana, and speaks fluent Cajun-French. After serving as Executive Assistant to the Governor of Louisiana, Kirk attended the Southern University Law Center, where he finished first in his class in 1991. Kirk received American Jurisprudence Awards in five subjects and served on the Moot Court Board.

Kirk began his association with the firm as a law clerk during law school and continued as a lawyer, participating in his first jury trial three days after being sworn in as an attorney, on October 11, 1991.

Kirk has served on Executive Committee, Board of Governors and Council of Directors of the Louisiana Association for Justice (formerly the Louisiana Trial Lawyers Association) and served as Chairman of the LTLA's Auto Torts Section in 2005-2006.

Kirk has handled almost every kind of personal injury action, but has been especially successful in products liability and admiralty, maritime and offshore injury cases. Kirk also represented a Turkish naval crew that was accidentally fired upon by a U.S. Naval vessel during war exercises, and was one of the lead trial attorneys representing Louisiana crawfish farmers against a pesticide manufacturer that resulted in a $45 million dollar settlement during trial. Kirk currently represents numerous land owners in oil and gas field contamination cases.