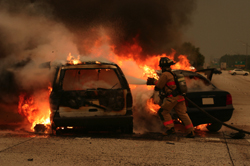 The experienced Louisiana fire accident lawyers and staff at Dué Guidry Piedrahita Andrews L.C. have the compassion and understanding of burn injuries necessary to help you or your family through the devastating, debilitating and disfiguring consequences of burn injuries and the scars, both emotional and physical, that these catastrophic injuries leave behind. Our Louisiana burn injury trial lawyers have collected millions of dollars for burn victims, with multiple clients receiving in excess of $11,000,000 each. Paul H. Dué represented the lead plaintiff in an industrial accident case that resulted in severe burn injuries to two employees and the death of one other employee, and which resulted in a $158,000,000 combined jury verdict in Plaquemine, Louisiana. At the time, this jury verdict was believed to have been the largest personal injury jury verdict in Louisiana history.  And, in 2010, Randy A. Piedrahita and Kirk A. Guidry obtained a $11,000,000 jury verdict in St. Landry Parish against a natural gas supplier for burn injuries sustained as a result of a house explosion that occurred after an unauthorized person turned-on the gas at the house meter after the gas had been negligently shut-off by the gas company without the use of a federally compliant locking device, The Opelousas, Louisiana jury verdict was affirmed on May 25, 2011 by the Louisiana Third Circuit Court of Appeal.

If you or a loved one sustained serious burn injuries during an accident, contact the experienced Baton Rouge, Louisiana burn injury lawyers at Dué Guidry Piedrahita Andrews L.C. to schedule a FREE CONSULTATION.

Louisiana Injury Lawyer Blog - Burn Injuries
Contact Us
Practice Areas
Client Reviews
★★★★★
"Amazing place to work and best place to go if you’re looking for Attorney’s that care about YOU & YOUR treatment/recovery." A.B.
★★★★★
"I would have been so lost without your help. Thank you for making me feel like a normal human being again! I just love y'all!" B.B.
★★★★★
"Thanks again for all you have done. I can't explain the peace of mind I have had since talking to you." T.P.
★★★★★
"You have been such an important part of our lives! You have done so much to help and make life enjoyable after the accident! Thank you for all the love and support!" P.C.
View More
Submit a Law Firm Client Review